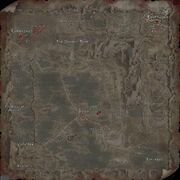 Xaphxan the Invisible is a Brutal spirit that haunts the Kamengrad Ruins. Once one of the most respected and remarkable professors of Kamengrad University, his obsession with the corruption of the Kamengrad Ruins has led him to the dark undeath he now leads. Preying upon the foolish professors and students that attempt to research the ruins, using his invisibility to stay out of sight from both his preys and his predator, Master Hunter Lav, who uses a Lip Balm to drive him crazy and force him out in the open.

The first wild Brutal that uses ranged attacks. Using a shield will go a long way against his spells, but do not underestimate him when he comes in for a Blunt punch. On higher levels, starting off with Bats can be worth it given his weakness to dark damage.

In addition to the normal rewards of a fight (gold and experience), Xaphxan always drops a unique Cape which boosts Control Abilities in addition to item drop chances and Focus regeneration.