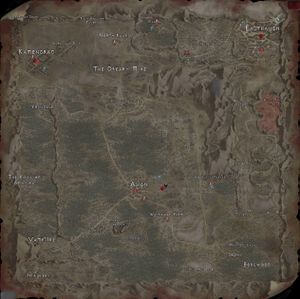 Styx's Servant is a Brutal spectre. A bringer of death and the uncontested lord of Angel's Fall Cemetery, Styx's Servant's very presence on the mortal plain corrupts the land. He may not be Styx himself, but that does not mean he is not a threat. One of the strongest Brutals in the world, he is continuously enlarging his dominion of souls by adding in the unwitting humans who dare enter the Cemetery he haunts. Do not spend too long in this Cemetery or you, too, will become one of its residents.

Basically a harder and tankier version of the common Spectre monster. He doesn't require a specific build until the highest Rebirth, since he is weak to stun weapons, fire Conjurations as well as piercing, so that includes most builds there are. If you're the melee type, be prepared to keep some Focus ready for a Petrification since he has a bit of dodge.

In addition to the normal rewards of a fight (gold and experience), the Servant always gives you a unique Cape that boosts your Control Abilities as well as your dodge chance and weight capacity.

In greek mythology, Styx is one of the rivers that runs through the underworld and prevents the dead of coming back, for only Charon the boatman could safely cross it. In popular culture, it is a name often associated with legends of the afterlife and personifications of death. This could mean that the Servant merely represents a much more dangerous Brutal.