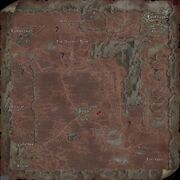 Enigma is a mysterious Brutal. He seems to be ubiquitous, like some elusive entity that watches everything and only revels itself when it is suitable. He appears as a giant version of one of his Riddlers - the strange hermits that seem to be his devoted heralds - and wields devastating spells. Little else is known about him.

As you can see on the right, finding this Brutal is not as straightforward as the rest of the wild Brutals. Here's how it works :

Note that you can always talk with the Riddle Master again to get rid of the talisman (as long as the 5 riddle quests have been done, see Rebirth) or to get it back. This essentially acts like a toggle, but there is little point in disabling Enigma as you always get a 100% change to flee from wild brutals, including Enigma.

In addition to the normal rewards of a fight (gold and experience), Enigma drops his Cape which increases Instinct Abilities and boosts item drops and Focus regeneration. It also offers the most armor out of all the other Brutals, except those of the God Brutals.