From Vampire's Fall: Origins Wiki
(Redirected from Bane)
Jump to: navigation, search
This article contains spoilers. Read at your own risk! 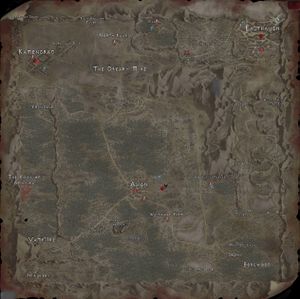 The Aendisea's Bane is a Brutal force of nature, in a literal sense. The end of the nation of Aendisea and an incarnation of nature's wrath, the Bane towers over even the oldest trees of the Shadow Valley's forests. Not many know of it's existence and for a good reason, since it remained dormant within the very temple where the Aendiseans used to try and control nature itself. It can only be awoken by lighting the fire in front of said temple, ignoring the long-forgotten warnings that are engraved in the ruins. The fool who would do so should avoid the Ruins of Aendisea, for the Bane will haunt them once again, ready to show the error of their ways to anyone who walks among the ancient rumble.

To find this wild Brutal, you need to find the extinguished fire near a little building in the southwest corner of the Shadowvalley. It's directly south of the Ruins of Aendisea, opposite the lair of the Beast. Once the fire is lit, the Bane can be encountered like any other [[Brutals#Wild|wild Brutal] inside the Ruins.

A fairly challenging Brutal. Very heavy on the magical damage and high HP pool. Don't be confused by her appearance of an overgrown crawler : the Bane's dodge is only average, and her ranged attacks deal magical damage, not piercing.

In addition to the normal rewards of a fight (gold and experience), the Bane always drops a unique Cape that gives a bonus to item drops and increases both the weight limit and the critical chances.