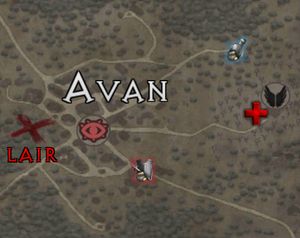 The town of Avan is located in the center of the Kingdom. It is a town of hunters with strong communal ties.

Avan was founded by hunters sometime in the past. The town avoided the devastation caused by the Witchmaster by, unknown to the masses, sacrificing Nicholas, the son of its town head Vaso to the Witchmaster for a ritual. The hunters have been searching for Nicholas, believing he went missing while on a hunt.

The town has several stores and places of interest. A Potion Maker named Tsisana can be found in the northeast, a healer named Holy Fredrich of the Sun can be found in the southeast, the proprietor of Calvin's Commodities, Calvin The Immortal, can also be found east of Fredrich, a Farseer named Hans-eer is in the central plaza, and the local Blacksmith is located in the south.

There are multiple places of interest such as the central plaza that holds a manor belonging the the head of the town and a massive bonfire, a sizeable market in the northwest part of town, a tavern just south of the central plaza, tents are set up at the town's west entrance, the Church of the Sun in the southeast, and four other bonfires surrounding the town. A Vampire Lair is north of the western road into town and there is a small grass field holding several monsters, mostly Rats, Blood Rats, and the rare Dragonling in the east part of town, near the Blacksmith.

- Head of The Village Vaso

- Holy Fredrich of the Sun